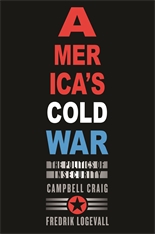 U.S. foreign policy in the post-World War II era has been notable for its militarism, with the United States embroiled in a more or less permanent state of war coupled with military spending that now exceeds that of the rest of the world combined. How this came to be is the question that Craig and Logevall set out to answer in America’s Cold War.

The authors argue that to a large extent, U.S. political leaders fueled the Cold War as a response to domestic political pressures. The Truman Administration had substantially “contained” the Soviet Union by 1950, they write, yet from then on the American role in the Cold War turned global, “much more ideologically charged,” and “far more expensive.”

Partisan politics “played a key role,” as each party sought to outdo the other in anti-communist rhetoric and policy, leading Truman to quadruple the military budget and to engage in saturation bombing of North Korea, to list just two examples. U.S. insistence on a one-sided settlement meant that the war continued long after it had clearly reached a stalemate, at the cost of hundreds of thousands of additional lost lives.

Similarly, the authors contend, the sharp escalation of U.S. involvement in Vietnam during the first half of the sixties was driven by the need of Presidents Kennedy and Johnson not to appear soft on communism, more than for geopolitical reasons.

U.S. Cold War policy took a sharp turn to the right late in the Carter presidency, continuing into the Reagan years. Despite Reagan’s overt anti-communism, the authors point to his presidency and that of his successor as contributing to the end of the Cold War. Although granting primacy to Soviet Premier Gorbachev and anti-communist developments in Eastern Europe, the authors ascribe an important role to President Reagan. His “change of heart,” they claim, was due to a genuine concern over the prospect of nuclear war, and this led to the signing of the Intermediate-range Nuclear Forces Treaty (INF) over the objections of his advisors.

This is hard to swallow. Gorbachev’s eagerness for an agreement prompted him to offer proposals that were so lopsided in favor of the U.S. that only a fool would have dismissed the prospect of negotiations. Reagan went to Reykjavik intending to present a proposal designed to be rejected by the Soviets. Much to Reagan’s surprise, it was accepted, and under terms of the INF, the Soviet Union eliminated more than twice as many intermediate-range missiles as did the U.S.

But what “change of heart” did Reagan demonstrate when he proposed sharp reductions solely in land-based ballistic nuclear missiles, in which the U.S.S.R. had a preponderance, while excluding submarine-based ballistic missiles, where the U.S. enjoyed a vast advantage?

Is it accurate to give credit to Reagan for taking a less confrontational stance toward the Soviet Union, as the authors do, despite his having mounted the largest covert operation in history in Afghanistan? For that matter, does their assertion square with William Casey’s CIA sponsorship of armed cross-border raids into Soviet Central Asian republics, or the distribution of Islamic extremist literature in Uzbekistan?

The authors praise Gorbachev for making an offer to President G.H.W. Bush in 1991 that the Soviet Union would become “part and parcel of the world economic system,” and they contrast that with Stalin’s refusal to do the same after World War II, “which helped bring on the Cold War.” Gorbachev, the authors are correct in pointing out, “unambiguously declared that the U.S.S.R. would join the capitalist world in the global marketplace.” But in concluding that the earlier failure on the part of the Soviet Union to abandon its economic system to the interests of Western capital was a major factor contributing to the Cold War, the authors inadvertently reveal that there may have been more to America’s Cold War than containment and domestic political advantage. It is not by chance that there has never been a socialist nation which at some point or another was not the target of U.S. political, economic or military muscle.

The “economic costs” of the Cold War were “vast,” the authors write, as indeed they were. “The United States spent trillions of dollars on Cold War interventions of dubious worth and on weapons systems that had little or no obvious utility in an era of Mutual Assured Destruction.” But the cost of those interventions was borne through taxes increasingly shouldered by ordinary working people, while the advantages accrued to investors. Not only were nations thereby opened for U.S. corporate penetration, but the experience of targeted countries served as cautionary tales for others who may have contemplated a more independent policy. Nuclear weapons systems may have lacked obvious utility in that their use would have led to annihilation, but they were of enormous benefit to the profit margins of military contractors, not to mention serving to limit the extent the Soviet Union could safely counter aggressive U.S. interventions throughout the world.

For the authors, the bloated Pentagon budget and military bases abroad are an “addiction,” and the military-industrial complex remains “a power within itself, largely insulated from public opinion, resistant to correction from the outside.” Meanwhile, domestic political concerns continue to apply, as no politician “was going to take chance of being called weak-kneed on Saddam.” We are offered a view of U.S. foreign policy as an unstoppable perpetual motion machine, serving no rational purpose other than to ensure the electability of American politicians and to satisfy interest groups.

It surely cannot have gone unnoticed that U.S. spending on the military has continued to grow since the end of the Cold War. A “final cost” of the Cold War has been the “militarization of American politics,” the book concludes. But can that be considered a cost of the Cold War? That appears to mix cause and effect, and it would be more accurate to point out that a militarized foreign policy has had and continues to have more do with economic interests that have persisted whether there was a Soviet Union or not. Pumping money into the overflowing pockets of military contractors has become the main driving force in the economy, while U.S. military adventures abroad open up markets, land, labor and resources for exploitation by U.S. corporations.

America’s Cold War contains much interesting detail on internal U.S. discussions around Cold War policy, and the authors do demonstrate the importance of domestic political considerations, but their celebration of the end of socialism and the apparent triumph of capitalism (now looking rather tarnished) tends to blind them to the political-economic imperatives of U.S. militarism.