One of the main features of NATO’s bombing campaign against Yugoslavia in 1999 was the deliberate targeting of factories and manufacturing plants. As a member of a delegation travelling throughout Yugoslavia shortly after the end of the war, I could readily see that such targeting had been methodical and thorough. Wherever we went, there was no military value in the facilities that NATO chose to destroy. Indeed, the common criterion was that state-owned and worker cooperative factories and plants that supported many people were singled out. The apparent intent was to drive much of the population into destitution and make people more amenable to demands to install government eager to do the West’s bidding.

The largest and most significant factory complex in the Balkans was Zastava, producing over 95 percent of the automobiles operating in Yugoslavia. Centrally located in the city of Kragujevac, this diverse factory complex also manufactured tools and machinery.

Workers at Zastava recognized that it was far too tempting a target for NATO planners to ignore. Determined to save their factory, they decided to form a human shield by occupying the factory complex around the clock. Three days after NATO began its war, workers and management issued an open letter which was sent to trade unions abroad and U.S. President Clinton, British Prime Minister Tony Blair, U.S. Secretary of State Madeleine Albright, and other Western leaders. “We, the employees of Zastava and freedom-loving Kragujevac, made a live shield,” the statement proclaimed. “Even at the shift end, even at the alarm sound, the Zastava workers did not leave their workshops, but remained to protect with their bodies what provides for their families’ living, that in which they have built in years-long honest work in order to provide for their better future.” The letter warned NATO leaders, “We want you to know that the attack on our factory shall mean a direct death to thousands of men and women and an enormous spiritual and material loss to their families.”

Letters of support poured in from trade unions in Third World countries, while those in the West remained silent. As the days passed, it became increasingly evident that NATO was systematically destroying factories and work sites. NATO had also wasted little time in demonstrating its contempt for human life. Wisely, the workers at Zastava chose to modify their human shield by moving outdoors and forming a ring around the factory plants, rather than occupying them. Work inside the plants, however, continued.

Shortly after 1:00 AM on April 9, NATO responded to the workers’ letter by sending a volley of cruise missile flying into Kragujevac. Dragan Stankovich, export director for Zastava, was in his apartment when he felt the first detonations, which he likened to a strong earthquake. The sky turned red, and his first thought was to hope that the factory had not been hit. His apartment was close to Zastava, so he walked hurriedly over there. Ten minutes after the first attack, the next wave of missiles struck. “I was very close,” Stankovich told us, “but I couldn’t see the bombs. Only a series of mushroom clouds. You could see the explosion and big fires only. You couldn’t hear anything. Strong light and fire. Like an atomic bomb. Like mushrooms.” The power, assembly, and paint and forging plants were all demolished in the assault. In all, 124 workers were wounded, but miraculously, no one was killed. Ambulances and fire trucks arrived quickly at the scene and retrieved the injured. At the local hospital, a woman, her head bandaged, defiantly told a reporter, “I can only tell Clinton – we will build a new factory. He cannot destroy everything.” 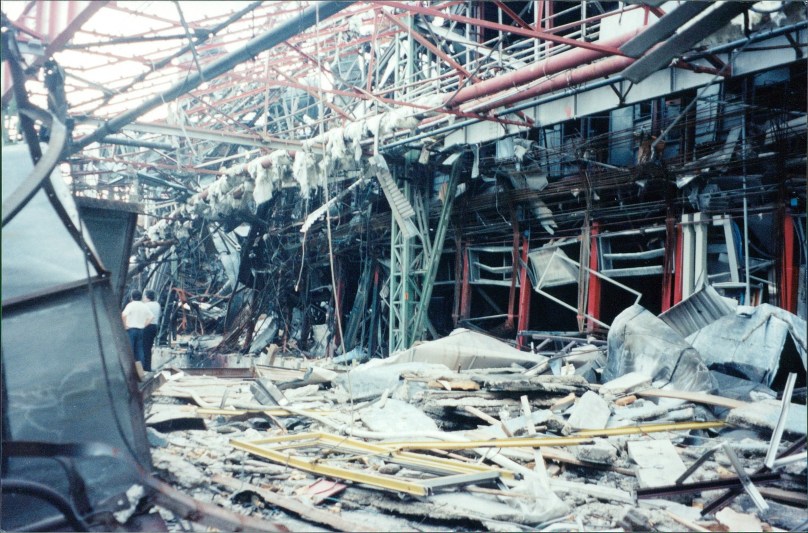 Three nights later, another wave of missiles struck Zastava at 2:45 AM and then yet again ten minutes later. The factories were lightly staffed by this time, and only 16 workers were wounded. As a result of the two attacks, the six largest plants at Zastava lay in ruins. Interestingly, the one plant that manufactured assault rifles was untouched, underlining the fact that NATO’s motivation was the deindustrialization of Yugoslavia. One woman was quoted as saying: “When we saw it burning, we all wept. It was the same feeling as if someone had burned down your home.”

Stankovich told us that the factory complex in Kragujevac employed 28,000 workers, and another 8,000 in associated Zastava factories throughout Yugoslavia, most of which were also bombed. “Of all the catastrophes that befell us,” he said, “we consider the humanitarian catastrophe to be the biggest.” One of the salient aspects of the disaster, he felt, was that workers in many other factories depended on Zastava. There were many plants throughout the nation that supplied components to Zastava. With Zastava in ruins, workers and at these plants and their families, some 200,000 people in all, were left without a means of livelihood.

Zastava’s director, Milosav Djordjevich, ruefully observed, “For the workers, the factory is life. On the nights of the 9th and 12th of April, all our dreams were destroyed in a mere fifteen minutes of bombing.” He told us that he found it difficult to believe that there were people who could inflict death and destruction on others. After months of listening to the gloating of Western leaders over the slaughter they were carrying out, I had no such difficulty.

The power plant supplied electricity, compressed air, hot water and steam for production at Zastava. But its destruction had a wider impact as well, for the plant also provided heat and energy to a large sector of the city. “About 15,000 flats, schools, hospitals, and other institutions depended on the Zastava power plant for their heat,” Stankovich explained. One of the missiles exploded about 20 to 30 meters above the plant, ripping the roof from the building and destroying transformers, turbo-compressors, and the control room. “Smashed,” a worker told us. “Everything was smashed. We have removed everything to be repaired.” Resumption of production at the power plant was an urgent task. Workers had already removed the rubble in this plant by the time of our visit, and two of the eight turbo-compressors had already been repaired. But the destruction of the plant’s transformers sent two tons of highly toxic PCB pyralene pouring onto the ground and into a nearby river.

The forging plant was a ruin after being hit four times. When the plant was in operation, components were formed for automobiles, agricultural machinery, and railways. The roof was gone. Mounds of rubble, damaged machinery, and twisted girders confronted us. Scraps of metal debris hung in clumps from isolated and deformed steel bars. The three-story office section of the forging plant had taken a direct hit, and a large section of its façade was blown away. What remained of the upper floors sagged alarmingly. Adjacent to it, the older forging plant presented a stark appearance. The plant’s heavy concrete walls bore the scars from explosions, and its roof was mostly missing. When a missile exploded on the building, concrete columns fell on the heat treatment area, and large chunks of concrete were hurled about, injuring several workers. NATO “had drawings, coordinates, everything,” Djordjevich remarked, “as if they played us with joysticks.”

Djordjevich regarded the paint plant as the pride of Zastava, housing as it did modern robotic production lines. Here, the devastation was even more terrible than in the other plants. It was shocking. Four missiles had left the plant roofless and buried in a carpet of debris. Mountains of twisted and jumbled wreckage rose above the rubble, resembling in some sections abstract sculptures. Djordjevich lovingly described the advanced technology utilized by the plant. “They hit this directly, as you would hit a man in the heart.”

Damage to the automobile assembly line plant was also severe. Merely to clear away the rubble would be a daunting task. Fifty-four workers in this plant were injured when a blast caused the roof to collapse on them. The plant “was very beautiful to see when it was functioning,” Djordjevich told us. “Now look at it. It’s a sorrow to see.”

It was nearing 9:00 PM, and it had become too dark to view the truck plant and tools factory, both of which had been completely demolished. We were instead taken to the computer center, where the headlights of our vehicles were projected onto the building. It was a ruin. The explosive force of two missiles was so strong that the building was lifted from its foundation before collapsing. Two IBM computers, costing a total of $10 million, were lost. Because the computer center was not operating on the night of the attack, only two people were inside, both hiding in the shelter after the air raid siren had sounded.

In all, destruction at Zastava was estimated to amount to $1 billion, straining the Yugoslav government’s ability to finance its reconstruction. But that did not deter efforts. By January 2000, eighty percent of the rubble had been cleared at Zastava, a monumental endeavor in itself. Before long, small-scale production resumed, which could only have been accomplished through efforts on a heroic scale.

Reconstruction continued, but after CIA-backed regime change in October 2000, the direction of Zastava’s future followed a different path. Hell-bent on privatizing the entire economy, the new government issued an ultimatum to workers at Zastava plants: accept a plan in which two-thirds of the workforce would be laid off, or Zastava would be closed down altogether. “We tried to sharpen our teeth on this one,” privatization minister Aleksandar Vlahovich explained.

In a society where the loss of economic facilities, sanctions, and a privatization program had rendered much of the working population redundant, employees at Zastava worried about the prospects of ever finding employment again. Serbian finance minister Pavle Petrovich contemptuously dismissed their concerns: “It is high time that people learn there won’t be any life support systems anymore.” Workers were left with little choice and acceded to the government’s demands, and those who lost their jobs received a pittance for sustenance.

Zastava was privatized in 2008, and soon after became a subsidiary of Fiat. It eventually was fully owned by Fiat-Chrysler Automobiles. Once ownership passed to Fiat, the Italian firm ignored its pledge not to dismiss workers, and immediately cut the remaining workforce in half. Protesting workers occupied City Hall, to no avail. They were quickly defeated.

With workers mocked as lazy parasites, neoliberal propaganda was in full swing. The government, which had long derided state-owned Zastava for relying on state subsidies, saw no contradiction in offering Fiat monopoly status, subsidies of ten thousand Euros per worker, and subsidies to support sales over for the first year. Fiat was also granted an exemption from paying any taxes whatsoever for a period of ten years, and land was given gratis to Fiat’s foreign component partners. A duty-free industrial zone was created for Fiat, with the government providing cost-free infrastructure. In all, these gifts to Fiat dwarfed any subsidies that state-owned Zastava ever received.

Back in 2001, privatization minister Vlahovich observed, “Zastava became an example, I hope, of tomorrow’s successful restructuring of the whole country.” And so it did, as foreign corporations now dominate the economy, the nation’s workforce subsists on abysmally low wages, and unemployment is at depression levels. For those who once proudly worked at Zastava, their economic rape is complete.