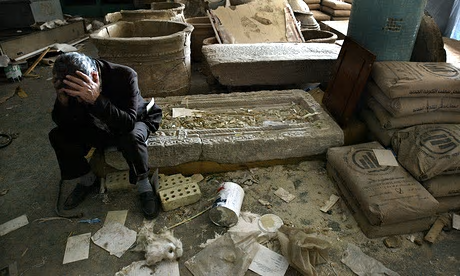 It has been called the worst cultural disaster to happen since the Second World War, and one archaeologist likened it to a “lobotomy of an entire culture.” [1] To the consternation of archaeologists throughout the world, the toppling of the Iraqi government unleashed a wave of looting and destruction of Iraq’s national patrimony.  Despite pleas for action from outraged scholars, the culturally blinkered Bush Administration belatedly only acted after media coverage had mushroomed into a public relations fiasco that threatened to upend the manufactured image of benign liberation.  Although the scale of loss from the looting of the National Museum in Baghdad was less serious than initially indicated, it was nevertheless a crippling blow, while elsewhere in Iraq the situation ran alarmingly out of control.  END_OF_DOCUMENT_TOKEN_TO_BE_REPLACED