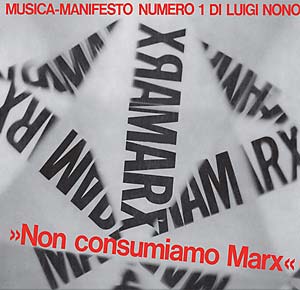 Luigi Nono composed Musica–manifesto #1 in 1969, at a time when his music incorporated political content in a highly expressive manner. The work consists of two distinct sections, the first of which is entitled Un Volto, Del Mare (‘A Face, the Sea’), and uses as its text Cesare Pavese’s poem Mattina (‘Morning’). The music is composed for magnetic tape and two sopranos, whose sung, spoken, and whispered words are interwoven with an electronic score that is hauntingly meditative.

The second section, Non Consumiamo Marx (‘We do not consume Marx’) is musique concrète. Nono combines electronically altered recordings from a student protest against the Venice Biennale in 1968, sounds of clashes between police and protesters, spoken and shouted slogans from the May 1968 demonstrations in France, the voices of revolutionaries, and a variety of other source materials, along with electronically generated sounds. Highlighting the “human experiences of the class struggle of our time,” the extrovert nature of this musical collage contrasts sharply with the introversion of the first. The multiple layers of material build to an intense climax, and the listener has the feeling of being thrust into the midst of political struggle.

“The fusion of electronic material and natural material is analyzed and composed so as to make it impossible to distinguish where one begins and the other ends,” explains Nono. The mix of disparate source material “is resolved in a technique-form-language which seems to me a latent form of the Bach cantata.”

Nono’s original intent was to superimpose the two sections, but that proved challenging. “I wanted to superimpose and interweave two different types of falling in love; that is, two conceptions, two materials, two techniques, two different uses of instruments, voices, and feelings, so as to induce a kind of ambiguity between titles and texts, and sounds and songs.”

For Nono, there was no distinction between political engagement and the creation of music. “In my opinion, both composing music in an electronic music studio and taking part in workers’ strikes, the riots with police, the picketing in front of a factory, are one and the same thing. I don’t see any difference: they are simply two different moments in time.”

In collaboration with Archivo Storico Ricordi, Die Schnachtel has performed a valuable service by reissuing this long unavailable recording. For those who have an interest in avant-garde classical music, this is essential listening.